This source discusses an American film, The Man Who Shot Liberty Valance (1962). It was directed by John Ford, who was famous for making historical films set in the western United States. The source focuses on an African-American character, Pompey, played by the actor Woody Strode.

The source is very challenging, especially if you're jumping into it without any other information. However, these questions will help you practice decoding what's important about the source.  You don't need to understand everything a source says in order to get a sense of its main ideas.

Not ready to take this quiz? You can go back to the previous quiz, or move on to the next section of the module. 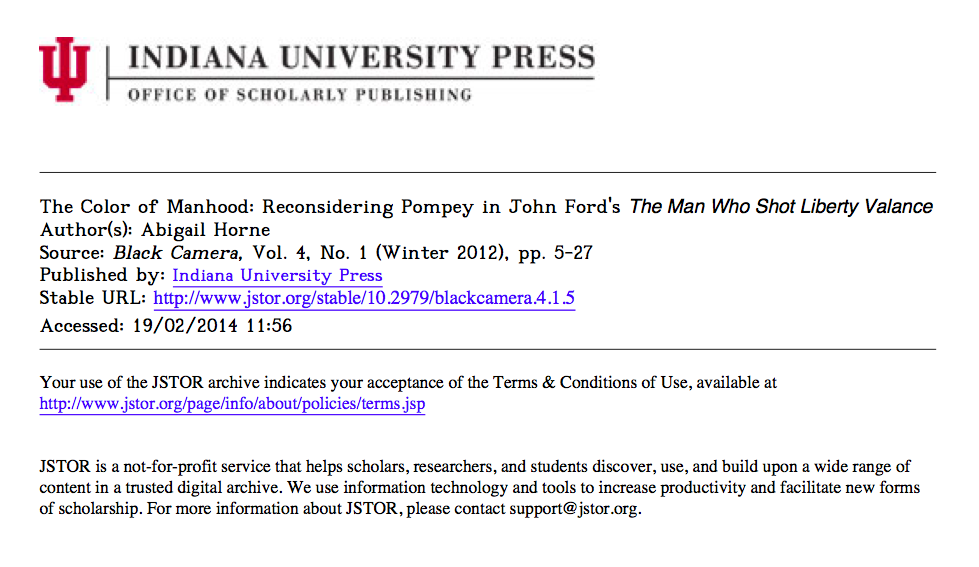 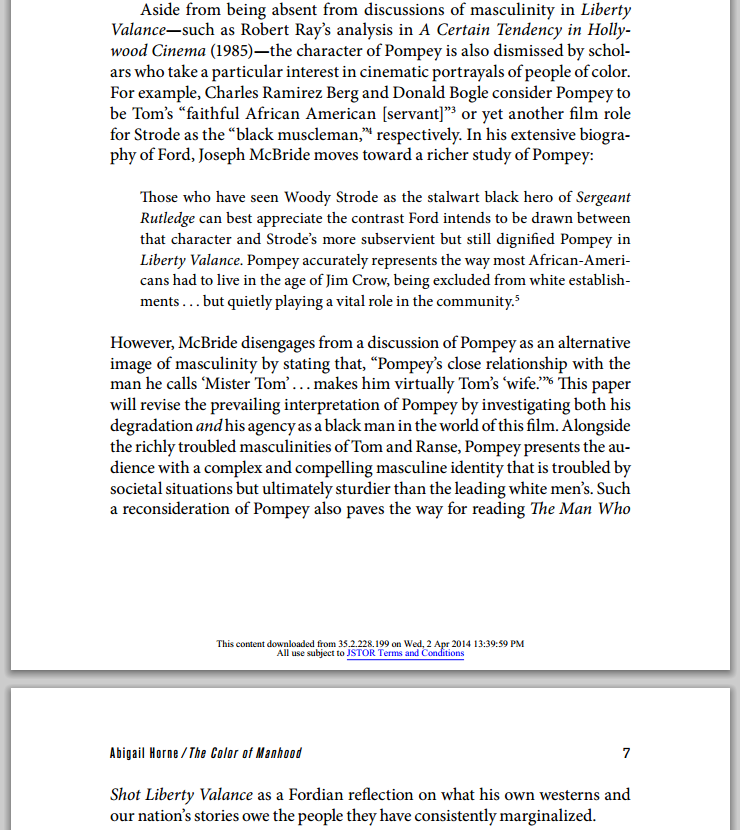 Expand to view transcript of text

Image #1: The following is the cover sheet from an academic journal article downloaded from JSTOR

“The Color of Manhood: Reconsidering Pompey in John Ford’s The Man Who Shot Liberty Valence”

Published by: University of Indiana Press

Image #2: The following is an image of a page from an academic journal:

Main text: Aside from being absent from discussions of masculinity in Liberty Valance—such as  Robert Ray’s analysis in A Certain Tendency in Hollywood Cinema (1985)—the character of Pompey is also dismissed by scholars who take a particular interest in cinematic portrayals of people of color. For example, Charles Ramirez Berg and Donald Bogle consider Pompey to be Tom’s “faithful African American [servant]” or yet another film role for Strode as the ‘black muscleman,” respectively. In his extensive biography of Ford, Joseph McBride moves towards a richer study of Pompey:

Block Quote: ‘Those who have seen Woody Strode as the stalwart black hero of Sergeant Rutledge can best appreciate the contrast Ford intends to be drawn between that character and Strode’s more subservient but still dignified Pompey in Liberty Valance. Pompey accurately represents the way most African-Americans had to live in the age of Jim Crow, being excluded from white establishments…but quietly playing a vital role in the community.”

Main text: However, McBride disengages from a discussion of Pompey as an alternative image of masculinity by stating that, “Pompey’s  close relationship with the man he calls ‘Mister Tom’…makes him virtually Tom’s ‘wife’” This paper will revise the prevailing interpretation of Pompey by investigating both his degradation and his agency as a black man in the world of this film. Alongside the richly troubled masculinities of Tom and Ranse, Pompey presents the audience with a complex and compelling masculine identity that is troubled by societal situations but ultimately sturdier than the leading white men’s. Such a reconsideration of Pompey also paves the way for reading The Man Who Shot Liberty Valence as a Fordian reflection on what his own westerns and our nation’s stories owe the people they have consistently marginalized.”