Not ready to take this quiz? You can also go back to the previous step or move on to the next quiz. 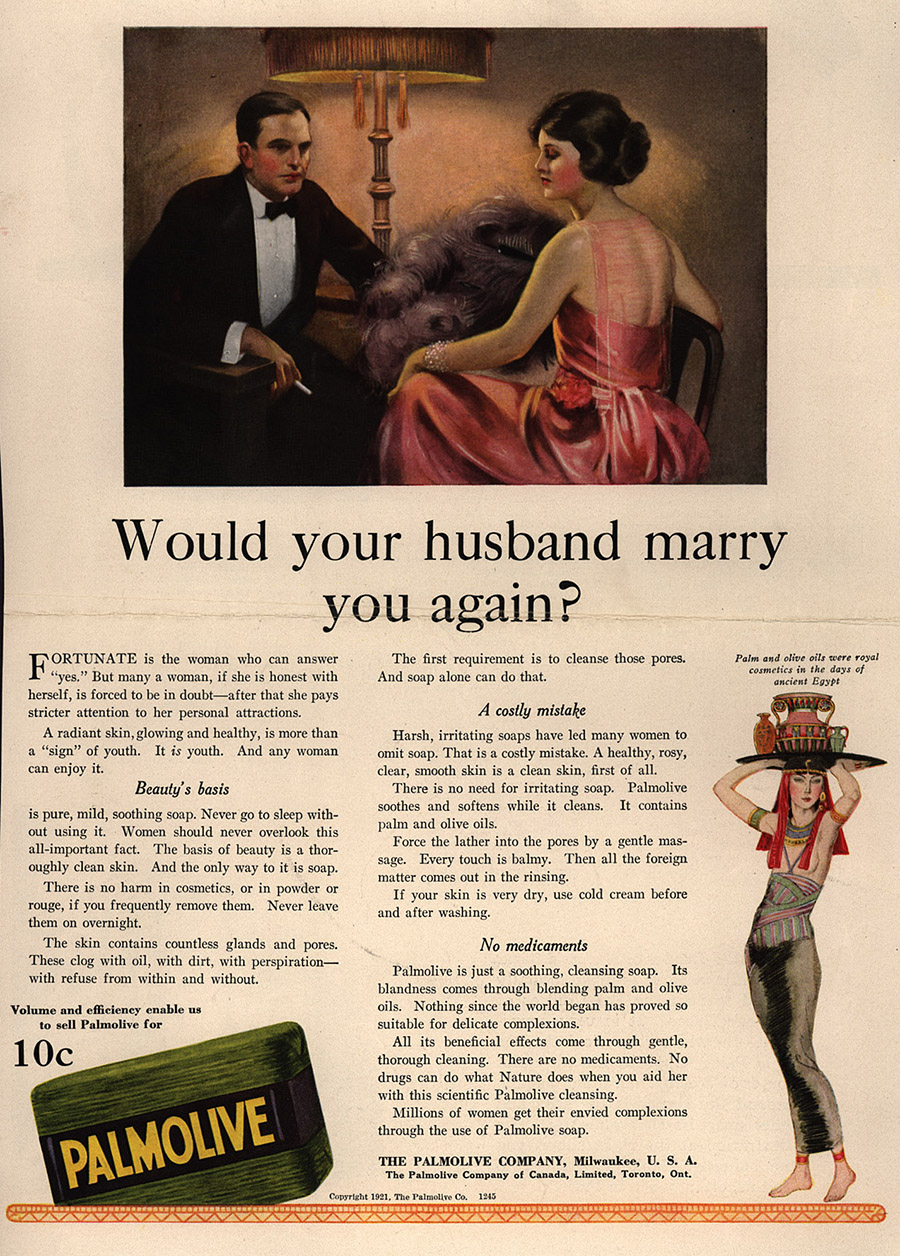 Expand to view transcript of text

This image is a page from an early 20th century magazine. At the top of the cream-colored page is a large illustration—it takes up one third of the page. In the illustration a man and a woman sit across from one another, lit by the glow of a large interior lamp. They are dressed in formal evening dress, with the man in a tuxedo, smoking a cigarette, and the woman in a pink silk dress of a style that was fashionable in the early 20th century. The man looks at the woman with a stern expression, and while the woman is facing him, she looks slightly away and does not meet his gaze. Underneath this image is a large headline in bold font: “Would Your Husband Marry You Again?”

The body of the text continues in three columns below.

“Fortunate is the woman who can answer ‘yes.’ But many a woman, if she is honest with herself is forced to be in doubt—after that she pays stricter attention to her personal attractions.

A radiant skin, glowing and healthy, is more than a ‘sign’ of youth. It is youth. And any woman can enjoy it.

Headline in an italics font slightly larger than the body text: ”Beauty’s Basis”

Body text: “is pure, mild, soothing soap. Never go to sleep without using it. Women should never overlook this all-important fact. The basis of beauty is thoroughly clean skin. And the only way to it is soap.

There is no harm in cosmetics, or in powder or rouge, if you frequently remove them. Never leave them on overnight.

The skin contains countless glands and pres. These clog with oil, with dirt, with perspiration—with refuse from within and without.

At the bottom of this column is a large illustration of a green bar of soap with the word “Palmolive” printed in yellow on a black band that wraps around the bar.

And a caption in bold type: “volume and efficiency enable us to sell Palmolive for 10c.” The price is in much larger font than the rest of the body text.

Body text” The first requirement is to cleanse those pores. And soap alone can do that.

Headline in an italics font slightly larger than the body text: “A costly mistake”

Body Text: “Harsh irritating soaps have led many women to omit soap. That is a costly mistake.  A healthy, rosy, clear, smooth skin is a clean skin, first of all.

There is no need for irritating soap. Palmolive sooths and softens while it cleans. It contains palm and olive oils.

Force the lather into the pores by a gentle massage. Every touch is balmy. Then all the foreign matter comes out in the rinsing.

If your skin is very dry, use cold cream before and after washing.

Headline in an italics font slightly larger than the body text: “No Mendicaments”

Body Text: “Palmolive is just a soothing, cleansing soap. Its blandness comes through blending palm and olive oils. Nothing since the world began has proved so suitable for delicate complexions.

All its beneficial effects come through gentle, thorough cleaning. There are no mendicaments. No drugs can do what Nature does when you aid her with this scientific Palmolive cleansing.

Millions of women get their envied complexions through the use of Palmolive soap.

In bold, small type at the very bottom of the page: THE PALMOLIVE COMPANY, Milwaukee, U.S.A.

In even smaller type: Copyright 1921, The Palmolive Company.

This column is narrower than the other two and contains only a drawing and a caption. The drawing is an image of a woman in an exoticized version of ancient Egyptian dress. She has bare feet and a dress that starts just beneath her bust. She is wearing a long red wig that covers her bare breasts, large jewelry in the form of a collar-shaped necklace, arm-cuffs and large earrings, and visible makeup. Her arms extend above her head to steady a large black tray that holds three supposedly ancient urns. Above the tray is the following caption: “Palm and olive oils were royal cosmetics in the days of Ancient Egypt.”